a year in books: October

As I mentioned before, I decided to take part in the year in books.

Reading is something that I do everyday. I can't imagine a life without books. It's so great to emerge in a story, slip into another world and get soaked up in the life and stories of other people - fiction or not. I can get totally lost in a book, though this only happened with a few books. The feeling of totally being IN that story. The feeling, that these characters must be real, that these stories really happened somewhere! And the total sadness and disappointment when the book is finished and you have to face reality again!

Since August books are not just my passion in my freetime but also the thing that I earn my money with. I work for an Austrian association that represents the rights and the interests of all Austrian booksellers and publishers. I love my work, I love being able to earn my living with books. And my new work means commuting by train, I also have again more time to read each day.

Right now I'm reading "The Medicus" by Noah Gordon. I just started it, so there's not much that I can tell about it - so far! A little review will follow next month! ;-) 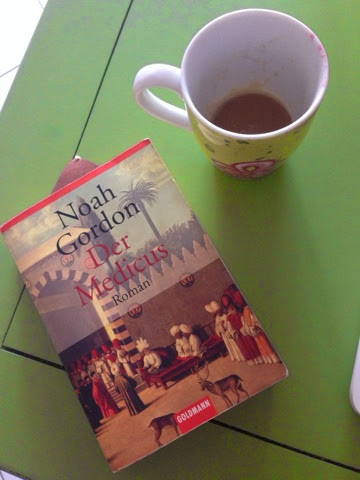 Instead I can talk about books that I've read in September. Now I thought about including these books, as these are written by Austrian writers and as far as I know are not available in other languages. But as I really like these books and authors I'm going to talk about them anyway!

The first book is "Polivka hat einen Traum", by Stefan Slupetzky. (The title translates as: Polivka has a dream) and is a work of crime fiction.

I only started to like Crime fiction in the last few years. I've read a few books of Slupetzky before. He has written a four-volume-series about a a detective called "Lemming". All of his books are situated in Vienna. I've you've ever been to Vienna you probably know, that the Viennese people have their own charme and way of live. They surely like to moan and complain. They're very negative but in a very lovely way. It's really hard to explain! But let me assure you, that Slupetzky really knows how to capture that "Wiener Charme". And he knows how to write a intricating plot.

The second book is "Brennerova" by Wolf Haas.

If you're able to speak German - go and buy yourself all of the "Brenner" crime fiction novels. Brenner is the name of the main character. And he's a real character! Kind of a loser type, used to work for the police but got sacked (which isn't really easy in Austria!) and now he's working as a private detective. He's something that you would call an anti-hero. He makes mistakes, he gets himself and those around him in danger. But he's also incredibly smart and somehow always manages to capture the bad guys. Well, most of the time. Some of these books have also been made into movies and have become quite popular and successful in Austria.


I don't know what else I'm going to read in October. Normally I don't plan my readings. If I have new books, I read them first. If I don't, I sit in front of my bookshelfes and just take out whatever seems inviting at that moment. If I like a book, I need to read it more then once. I'm a really fast reader, but I tend to forget what happened in the book very easily. So to REALLY read a book, I have to read it. Again and again. There are books that I've red ten and more times. Because I like them so much. Because I have memories attached to them. Because the stories never seem to bore me. I'm sure some of those will appear here over the months!